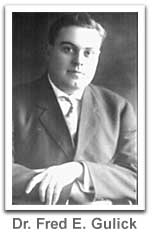 In the early 1900s most dental conferences were held on the east coast. Soon Chicago became the center for annual meetings of dental organizations as most trains went through Chicago and it was perceived as the perfect central meeting place. There was only one west coast meeting, the Pacific Coast Dental Conference. In 1928, a well known and well respected prosthodontist, Fred Gulick, got together with a couple of his friends, Russell Tench and Leslie Eames and decided to form a prosthodontic organization, and in 1930 the Pacific Coast Society of Prosthodontists was formed.