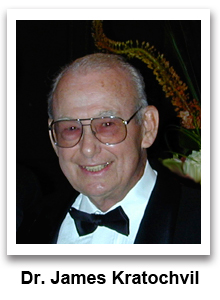 Frank James Kratochvil II was born in Osmond, Nebraska on a dairy farm. According to family lore, it was during a visit to the town dentist that young Jim noticed that the dentist worked in a clean office, unhampered by the extreme temperatures, kept regular hours, and didn?t work on Sundays! Perhaps it was during one of those early mornings while he was milking cows and delivering milk that Jim made the decision to become a dentist. He attended Wayne State, joined the Naval Reserve and eventually transferred to the University of Nebraska, College of Dentistry in 1943. While at U of N he met Mary Virginia Hall and they were married in 1947 at the Great Lakes Naval Training Center. At Great Lakes, Jim was assigned to the Prosthodontics clinic, beginning an illustrious career in the discipline and specialty of prosthodontics.

During his military career, he served aboard the aircraft carrier USS Rendova and was stationed at the dental clinic at Treasure Island, in San Francisco.  During the Korean conflict in 1952, Jim was sent to Barber Point Naval Air Station in Hawaii. At BPNAS, Jim was the head of the Prosthodontics clinic. Admiral Pollard there encouraged him to pursue further studies at Bethesda, Md., which he started in 1954. Successive 1st and 2nd year residencies at Great Lakes, and then in Bethesda completed his training. In 1957 Jim successfully challenged the American Board of Prosthodontics. Important mentors for Jim during his training were Dr?s Al Grunewald, Bob Lytle, Milton Brown and Henry Tanner.

After twenty years of naval service and the opportunity to retire, the escalating US military activity in Viet Nam delayed his appointment to the UCLA faculty.  Finally, in 1967, Jim began the ?UCLA Era?, a period that would exceed twenty years of formal academic appointment, including Chair of the first Post-Doctoral Program in Prosthodontics in 1975.This is the time for which Jim is best known to many of us. It includes his ascent to positions in professional organizations such as the PCSP, the Academy of Prosthodontics, JPD Editorships, committee service too numerous to mention, and consultant to the CDA, the ADA and even the Federal Trade Commissions Bureau of Consumer Protection.

During his UCLA career he continued to teach full time, present multiple day Extension CE courses, give over 175 invited lectures clinics or essays, and published a student syllabus. In addition, he would write three chapters in textbooks for other authors, produce teaching films for UCLA, and complete his own textbook on Partial Removable Prosthodontics (W.B. Saunders 1987) as well as publish many articles in refereed journals.

Jim always taught Prosthodontics as a ?therapy? not as a ?technique?. Jim was selected as a Senior Fulbright Scholar to Guys Hospital in London, in 1978, and was invited to return as a Visiting Scholar in 1986. In addition to his lecturing in England, Jim has given presentations in Australia, Canada, Holland, Italy, Japan, Mexico, New Zealand, South America, Spain, Switzerland and throughout most of the US. After his retirement from UCLA in 1988, Jim joined the Scripps Center for Dental Care in La Jolla, and continued to practice clinical Prosthodontics until retiring once more in 2000.

Today, Jim continues to enjoy life at La Jolla Shores, and may be found occasionally at the pistol or trap shooting range at Miramar, working out at the YMCA, or continuing to develop his hobby, painting scenes using acrylic media. Jim has enjoyed 53 years in his profession. He feels that improving the health and appearance of his patients has been a source of great satisfaction to him. His influence on removable prosthodontics has indeed been profound.

from an Essay by