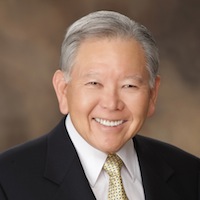 Roy Yanase?s significant contributions to the PCSP include being active in many committee activities and President of PCSP in 1999 at the Coronado Island Resort.

In addition to Roy Yanase?s career as an outstanding teacher of Prosthodontics, he has been a very productive researcher with over 27 book chapters or scientific articles.  Roy has lectured around the world on various topics in the field of Prosthodontics including dental implants and more recently caries prevention.

Roy stays active in private practice, lecturing and publishing.  Roy and Regina enjoy gardening and traveling with their family.